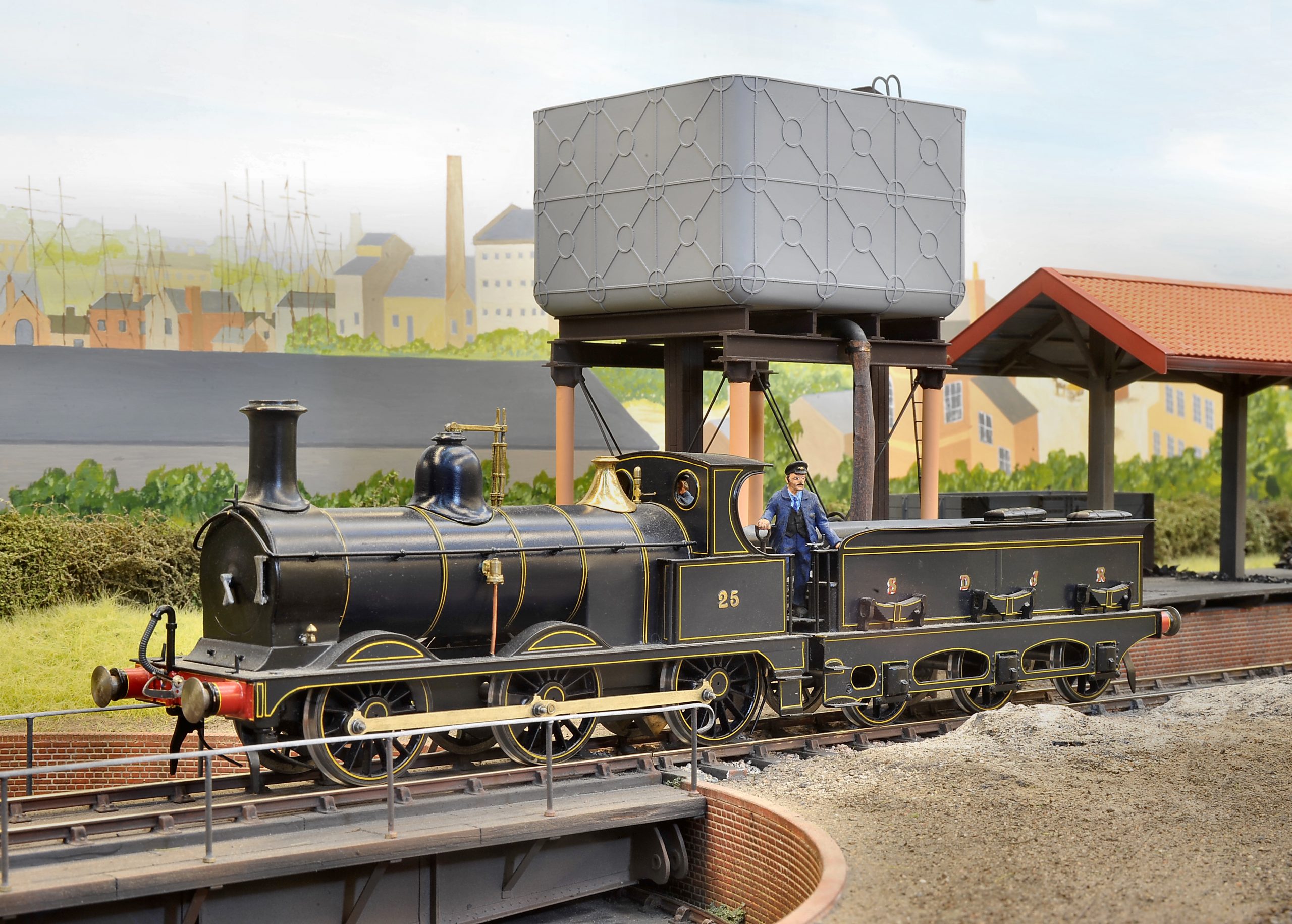 The following layouts (and more!) are expected to be at our 2021 exhibition. Click on any of the layout names to see pictures of the layout.

Bridgwater S&DJR (7mm).  The layout is set in the Edwardian period of 1904; with all the stock being kit or scratch built items representative of the glorious Prussian blue days of the Somerset and Dorset Joint Railway. The buildings and structures are accurate models of the prototypes, built from drawings and photographs using laser cut mdf and plastic. Operations are to a sequence representing, in compressed form, a typical days working on the branch during the golden age of the S&DJR. 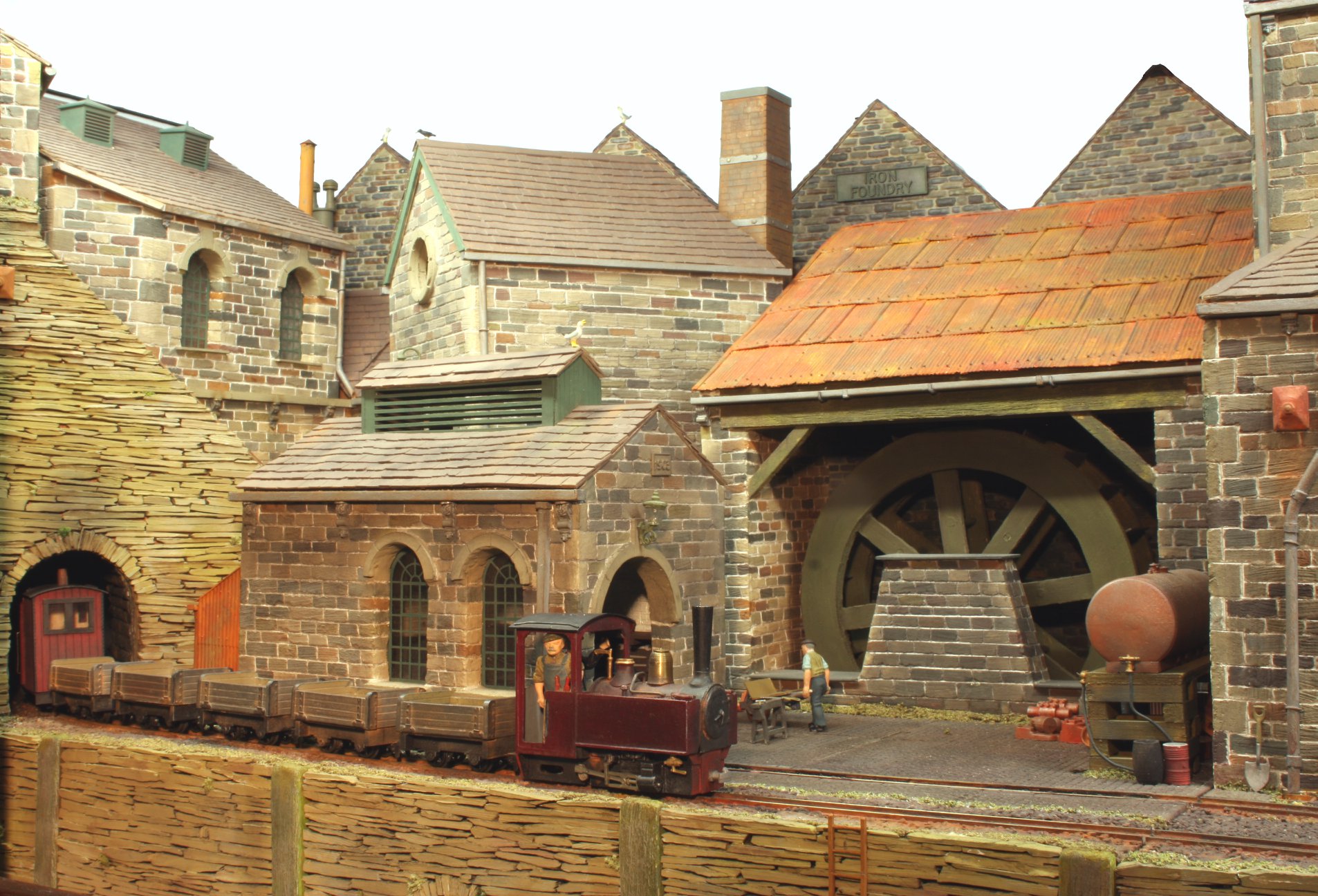 Canalside Ironworks (1/50).  It is a purely fictitious location, supposedly somewhere in deepest Derbyshire but it could be any industrial location in England around the 1920/30s period. The layout is modelled in the unusual scale of 1:50th, which equates to 6mm = 1 foot of reality. There are very few commercially produced model railway items available in this scale, so virtually everything you see before you has been either kit adapted or scratch-built. The track gauge is 9mm between the rails and the loco motors/chassis are commercial produced ‘N’ mechanisms. This layout has many operating features such as a working incline, water wheel, pumping beam engine, pithead winding gear and a furnace blast engine plus many more. If you have any questions or queries about the modelling techniques used please don’t hesitate to ask as we will be only too willing to answer your queries. 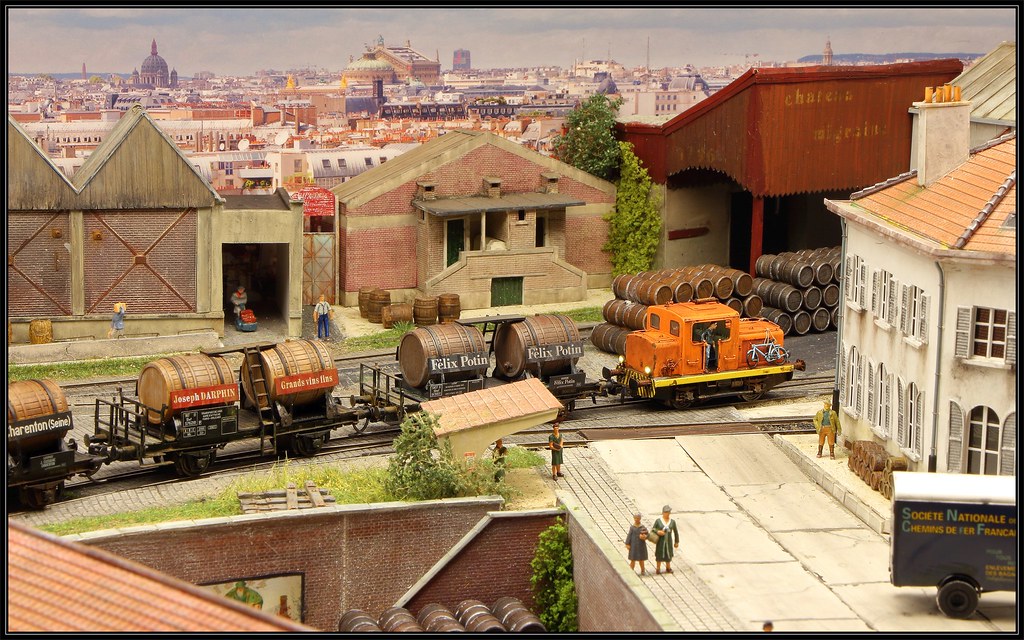 Chateux Migraine (HO). This small layout depicts an industrial railway serving the old wine trade district of Paris (Bercy). Many buildings are based on old photographs. 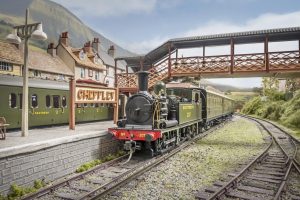 Cheffley (OO)  is a sleepy town that may have been served by the Southern Railway in August 1939. The station buildings are still painted in the colours of the LSWR due to funding issues. The town is a branch line terminus for fast passenger services from Waterloo operated by the new electrified trains. However some local services are still operated by venerable steam locomotives. The forty or so structures include kits from the Petite Properties range and also a selection of modified card kits from Scalescenes. The folly is scratch-build based on an article that appeared in Model Rail magazine. The station and signal box are “enhanced” out of card kits depicting the buildings at Midsomer Norton. If you look closely you might glimpse a peddling cyclist and some pecking chickens. Most steam locos are sound-fitted.

Club Modular OO9 Layout. In 2018 a dozen or so Club members set up a new Group, modelling in the OO9 Narrow Gauge scale of 4mm but running on N-Gauge track.  The Group agreed to encourage each member to model in his own style and according to his own flights of fancy, but adhering to a joint physical and electrical specification. The chosen design is based on 14 laser-cut boards bought from Tim Horn Baseboards, each 4ft by 18 inches. While each board can stand and operate alone, any board can be connected to any other to provide a continuous run as you will see. 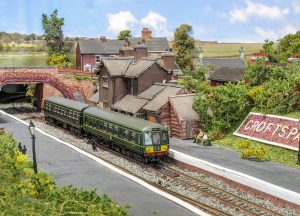 is a small wayside station on the East Coast Main Line at the Southern tip of County Durham.  It is unusual for never having had a goods yard – this was because Croft Goods was served by the Stockton & Darlington Railway’s Croft branch.  Set in 1960 the station sees the usual diet of expresses, fast freight and the occasional slower goods train.  One feature train is an 8-coach troop express hauled by a tender-first V2. The only stopping passenger services at Croft Spa were trains to and from the Richmond branch.  Croft Spa was the place where Charles Lutwidge Dodgson (Lewis Carroll) spent some of his formative years.

Elbow Lane (OO).  Elbow Lane is a small yard with a short semi-dilapidated platform for shuttle trains. Another old platform is no longer used for passengers and is a shunting neck for the Goods shed/platform. There is a small Loco stub that also doubles as a fuelling point. It uses DCC Sound to full effect in its loco stud. Points are operated by servos. Trackwork is the new Peco 00 Bullhead and rolling stock uses hands-free magnetic couplings. 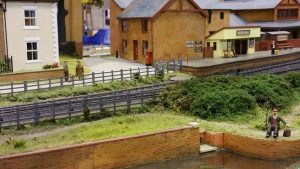 The North Holderness Light Railway running from Beverley to North Frodingham in East Yorkshire was a “very nearly built” railway.  Contemporary tile maps, such as that at York, show the projected route.  The layout shows a possible branch from North Frodingham to to Foston-on-the-Wolds, where there was a brewery and a large water turbine driven flour mill.  The location and buildings, or their remains, still exist although unfortunately never served by rail.

Greenfield Sidings (OO).  Our current club OO layout, shortly to be replaced by Hazelbury Junction. It is an oval set on Southern territory, with one set of tracks third-rail electrified.

Hampton End (G Scale) is a small branch line serving the village of Hampton End. It is set in BR days, a long time after closure when it is run by a group of enthusiasts who have purchased a few foreign engines. The main freight is fish from the quayside.

Haydon Square (7mm)  is set in London’s East End as a (fictional) small station and goods yard on the site of the (real) LNWR Haydon Square goods depot, accessed from the railway into Fenchurch Street. It is set in the 1950s, and traffic includes Inner London suburban services, and goods and newspaper traffic for the nearby Fleet Street. 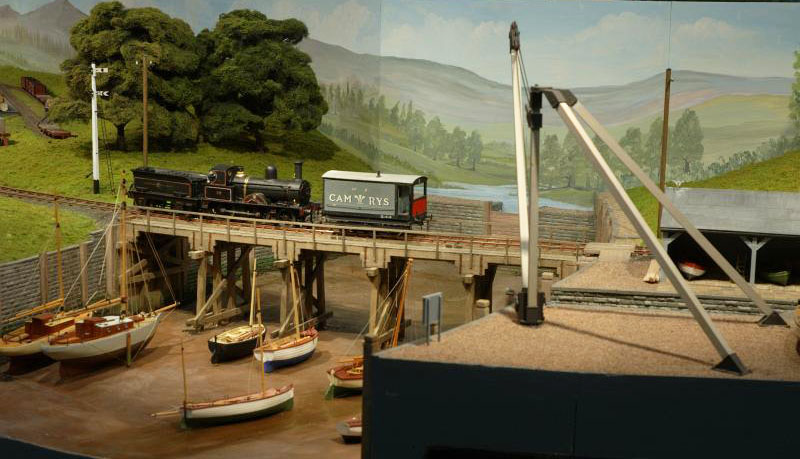 Johnstown Road (7mm).  We are living during the reign of King Edward VII when motor vehicles were still a rarity in the countryside. Women did not have the right to vote, life expectancy was much lower and the typical working man endured long hours of manual labour in field, quarry or mine. Johnstown Road condenses many features of the Tanat Walley Railway into an imaginary minor station with active goods traffic. The Tanat Valley Railway led a precarious financial life and this is reflected in the cheap methods of construction used for its buildings and facilities. In our imaginary world, Cambrian Railways spotted the traffic potential at the growing port of Porth Nevin and built an extension from the Tanat Valley-based Johnstown Road onto the coast. The existing narrow gauge railway serves nearby granite quarries and the arrival of standard gauge created the need for a transhipment wharf as well as some mixed gauge track on the quayside. 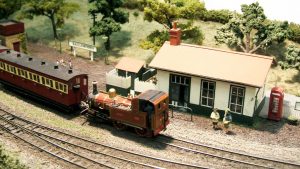 By the summer of 1964, the Isle of Man Steam Railway was a shadow of its former self. Tourists had not returned to the island after the Second World War and the halcyon days of the 1920s and 1930s were now a distant memory. After the boom years, short trains with few passengers were now the order of the day. Mannin Middle assumes the Foxdale branch had been extended southwards to form a junction with the southern line at Ballasalla. Although passing through a largely rural area which did not contribute much passenger traffic, the route would have been useful as a means of travelling from the south to the north of the island thus avoiding Douglas. The layout was originally built by Hugh Freeman of Kenilworth and was purchased by the present owner in 1999. Following an extended period of storage the layout has been restored and renovated to its current condition. 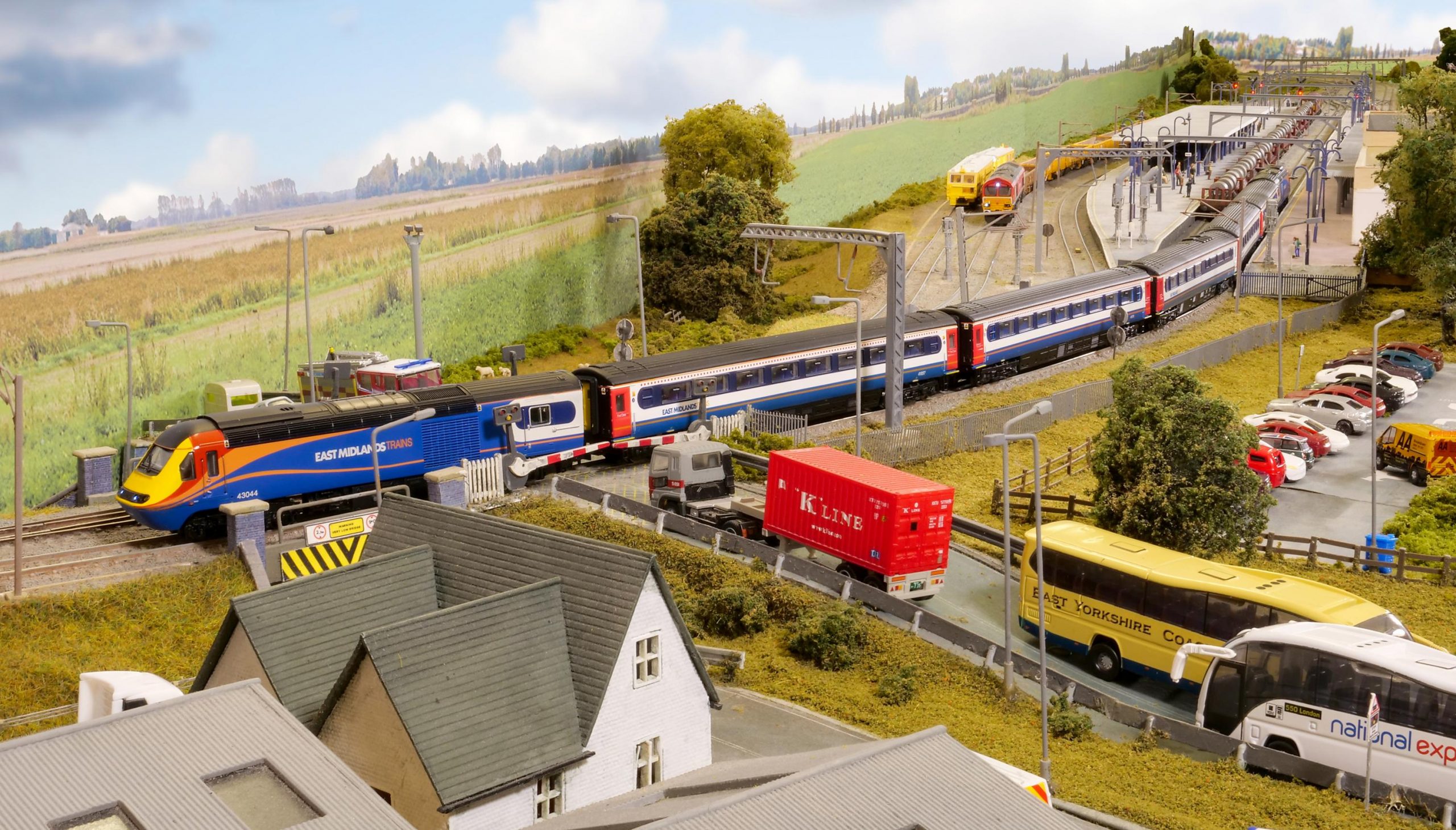 Neely (N). The layout’s name is derived from its track plan which is based on that at Ely in Cambridgeshire. The busy junction station provides plenty of movements including wrong line working, terminating trains and through workings. Its location also sees a wide range of freight and passenger traffic with prominent flows including Freightliner workings to and from Felixstowe docks, aggregate trains and engineering movements. The scenic section has been laid with Peco code 55 concrete sleeper track combined with wooden sleeper large radius and curved points to make the most of readily available track components. The storage yard at the rear has been laid with Peco code 80 track. The storage yard was comprehensively designed to allow real train operations from Ely to be replicated with specific sidings and point work set to allow destinations including London King’s Cross, King’s Lynn, Norwich, Peterborough, Stansted, Ipswich on the passenger side as well as freight workings to Felixstowe, Peterborough and Middleton Towers for sand trains. All of this means the storage yard design is a little unusual as there are a large number of short turnback sidings to accommodate the modern multiple units which operate through Ely. 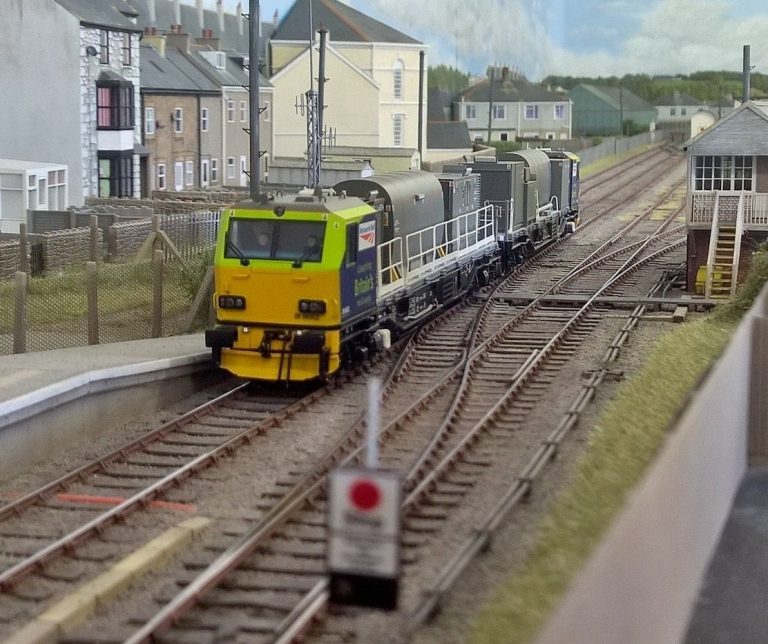 Pwllheli (P4)  depicts the station as it appeared circa 2012, selectively compressed but hopefully recognisable. When researching the model I made extensive use of Google Street View, Flickr, property listing sites Rightmove and Zoopla, and the Gwynedd Council planning applications website. The latter being invaluable, even if 90% of the documents are in Welsh! With an expanding folder of research, a very detailed 1:1, 3D model of the layout was created in Rhino. From the outset I wanted to showcase the use of contemporary design and manufacturing techniques. To achieve this almost every aspect of the layout, both scenic and structural has been designed with 3D printing, etching or laser cutting in mind.

Pontfadog (2mm scale, 5mm gauge)  represents Pontfadog village and station around 1900, with the Glyn Valley Tramway running alongside the Chirk to Glyn Ceirog road, now the B4500. The line opened in 1873 as a 2′ 4 1/2″ horse tramway, and introduced steam in the 1880s. It closed in 1935. It carried both passengers and minerals. 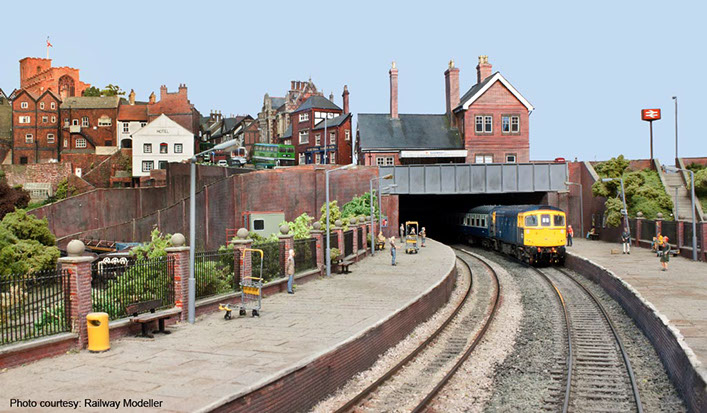 Scorbiton (OO)  is set in the Shropshire/Welsh Marches area. It centres around viaducts crossing the River Severn, with the town rising uphill to the right, and a canal system approaching on the left through a more pastoral landscape. The prominent town scene is inspired by buildings photographed in Whitchurch, Shrewsbury and Malpas.

Wisteria Collop (OO9)  is set in the fictitious south west English county of Somershire in the 1970s. It is a simple oval layout which includes a station and small goods yard and a few cottages. The road runs under the railway at one end and over the railway at the other. The buildings are kit bashed from the Ratio and Wills range, plus adapted Skaledale and Scenecraft cottages. Scenery is from Field Scenics, Greenscenes, Woodland Scenics and JTT.

Yellow Ridge Mine (1:24) depicts a (fictitious) small Canadian uranium mine in the 1970s, in a very run down condition. 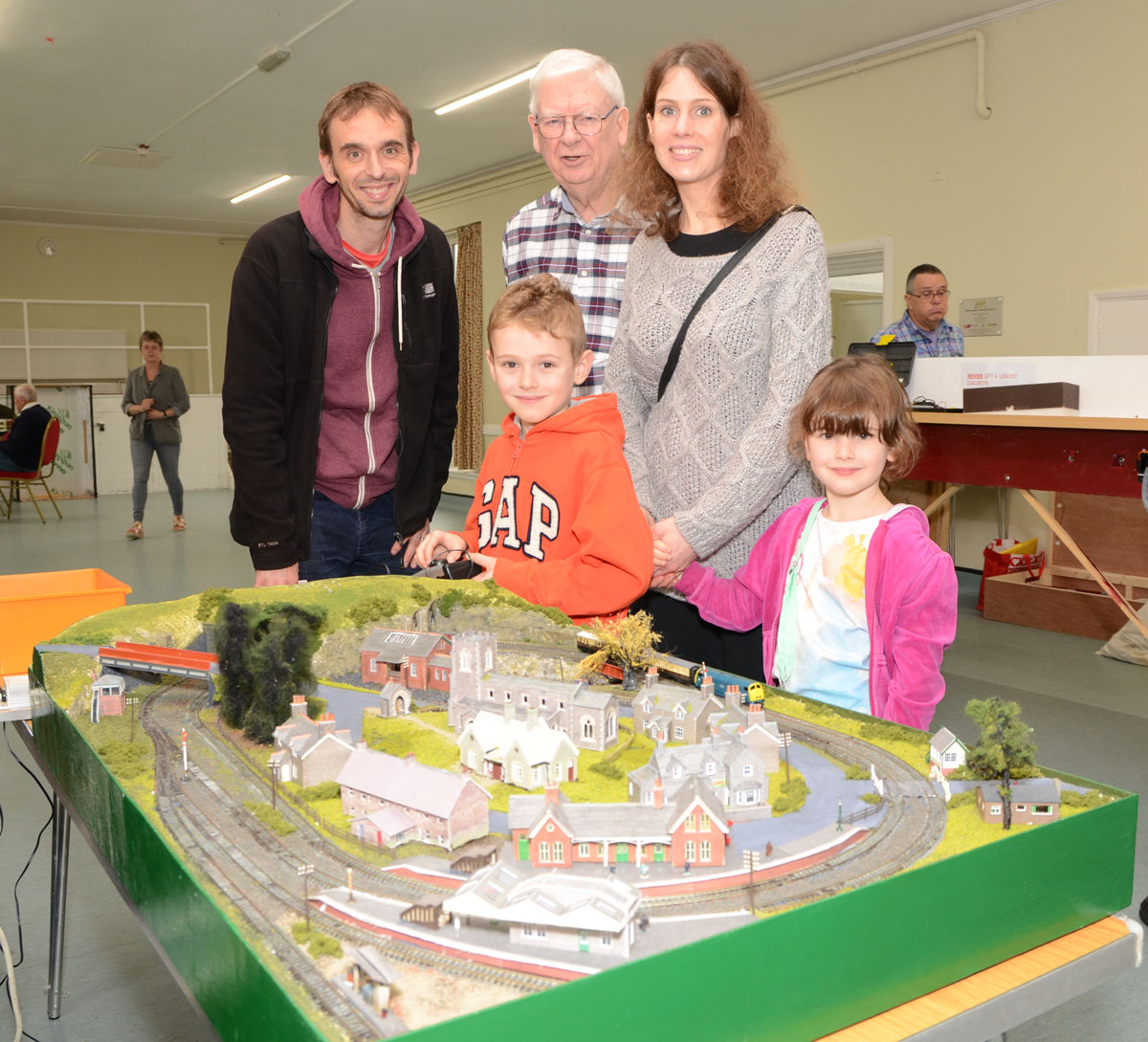 This is the layout we raffled in 2018, with its winner, William. The layout to be raffled this year will be similar in size and detail.

Charity Raffle Layout. We will be raffling a complete N Gauge layout at the exhibition. The layout was started by Paul Dineen, who died before he could finish it; we are completing it with assistance from his daughters. The proceeds will go to the Phyliss Tuckwell Hospice.