We recently sold our large O gauge exhibition layout Weydon Road. It was started in 2003 and had its final exhibition with us in October 2017.

The setting for Weydon Road is a fictitious location somewhere on the border of the GWR and SR around Wiltshire. It is a busy through junction featuring a double track main line, branch line, goods yard and relief lines.

The layout was run to a sequence of 53 moves from the fiddle yards at each end of the layout.

We attempted to produce a layout that allows a broad spread of rolling stock and a high standard of modelling to generate interest from anyone willing to get involved. It appeared twice in the Railway Modeller, firstly in October 2005 issue and then as Railway of the Month in the October 2011 issue. It also appeared in BR guise in Hornby Magazine in April 2013.

At the large and well-known exhibition at Stafford in early 2015, we were delighted to receive the award for ‘Best in Show’. Our grateful thanks to the organisers of this fine show. 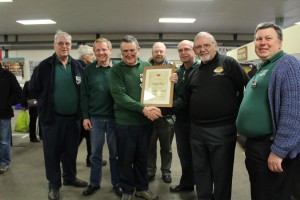 Click for photographs of Weydon Road in GWR/SR days.

Click for photographs of Weydon Road in BR days.