A number of our members have layouts that they exhibit: 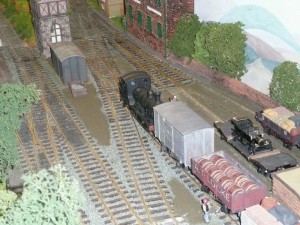 A totally fictitious layout portraying a GWR branch line terminus in the 1930s. The station is also served by the Southern Railway so a mix of locos are seen. Stock is a mix of RTR and kit built. A canal runs along the whole front of the layout. 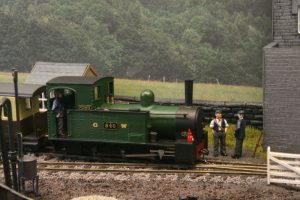 This 7mm NG layout has been inspired by a long term fondness for the Welshpool and Llanfair, the Wild Swan book on this subject by Glyn Williams and the lovely models produced by Kevin Trim at Dorset Kits. Reading the book I learnt of the rivalry between two alternative routes to connect Llanfair with the railway system, that to Welshpool and the one via Meifod to Llanymynech. As is well known, the Welshpool route was chosen, but my ‘what if’ was to suppose a branch had been built from near Heniarth to serve Meifod as a kind of consolation prize and to widen the traffic sources of the W&LLR. However, as I am taking liberties with the location, the layout is called ’St. Mary’s’ after the Meifod parish church dedicated to St. Tysilio and St. Mary.

The layout is set in the summer of 1930 and a modified version of the real W&LLR timetable has been used to which has been grafted on a service to St. Mary’s. Further traffic is provided from the quarry at Newbridge which is worked in to St. Mary’s by the quarry company’s own locomotives. Shunting at the station is done with a shunting tractor to allow the whole W&LLR to continue to operate with only one engine in steam.

Simon is building a modern image layout of a small station, which he intends to exhibit when complete. The layout is an oval with continuous running. Its “working title” is East End.

David wanted something to entertain his grandchildren while at the same time trying out some novel building methods and doing something to improve his limited skill levels.  He also wanted to scratch a 3D fancy and have fun unrestricted by the need to count rivets!

The result is “Whimsy” – a 009 layout based on a fanciful village at (roughly) 4mm to the foot incorporating a range of scratch-designed, scratch-built houses from card.  There’s a witch’s house (with broom and runway), a pub, a police station and a railway waiting room featuring an (unlikely) thatched roof.   Boris, the village barber, operates from a shed with .an even more random thatch. 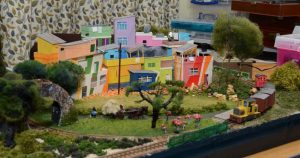 Track is a simple circle of 2ft diameter using Peco Code 80 with Peco 009 short-radius electrofrog points that provide a rail detour to an add-on board that is about 75% finished (watch this space).

The layout is analogue via a Gaugemaster hand-held controller mounted in a small box that also houses a bi-directional switch for point control. 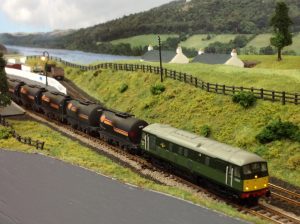 The layout is based on a rural station somewhere in Scotland. The station has a passing loop and limited freight facilities.

The layout can be operated in the steam/green diesel era, the BR Blue era, Scotrail era or as a preserved line.

Dillmouth is a 1930’s inspired Great Western Branch Line Terminus in ‘O’ Gauge. Although a fictional coastal town, taking its name from Agatha Christie’s “Sleeping Murder”, it actually depicts the two real stations of Alcester and Abbotsbury. The line was originally intended to extend further but lack of money forced the line to end in a cutting. Set on a peninsula, trains have to come in and turn around frequently. Click here for more detals. 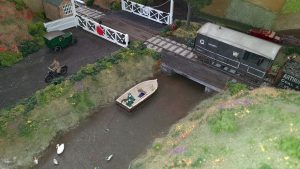 The layout is set in the 1930s. Mamhead is a village south of Exeter that did not have a station. The fictitious GWR branch line terminus has a passenger service to Exeter and a mixed train service to Torquay. It has a small goods depot and coal yard. A branch line was built to a creamery up the line, but it has no run round so the milk trains come into Mamhead to turn round. The layout is DCC with sound. Click here for more details.