The O gauge group have built a new layout which is suitable for taking to a wide range of exhibtions, from local shows to Warley, where it appeared in November 2018. Click here for the layout information sheet. If you would like to invite Haydon Square to your exhibition please email us using the 7mm address on the contacts page.

We are very pleased to say that Haydon Square featured as Railway of the Month in the September 2020 edition of the leading UK modelling magazine, ‘Railway Modeller’. The photographs were taken by the magazine editor, Steve Flint, and give a very good impression of the layout, highlighting its main features and its many small details. There is also an extensive description of our thinking in creating the model.

We are able to fit the layout, stock and operators in to three private vehicles, avoiding the need for van hire with all its cost and complication. It is a real location in East London just to the east of Fenchurch Street, though severe liberties have been taken with its history! (see later).

As much as it is possible to say that any layout is finished, Haydon Square is complete. Here are a few photos to show how it looks. 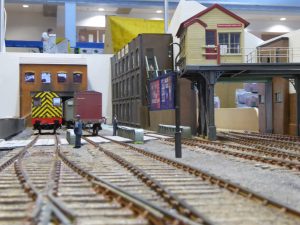 Looking towards the print works 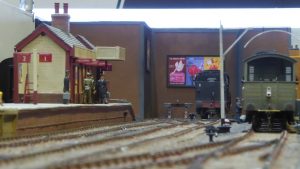 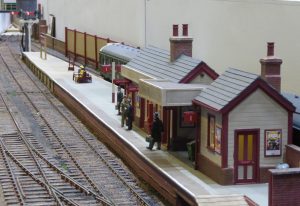 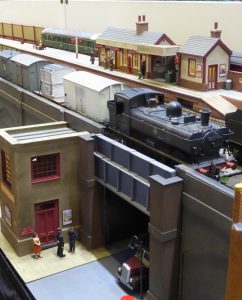 A cross-London freight arrives in the goods reception road 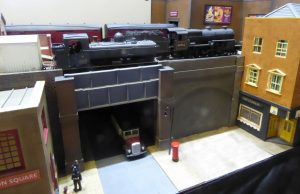 The Britania does good trade with railway staff 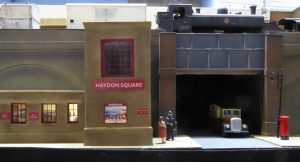 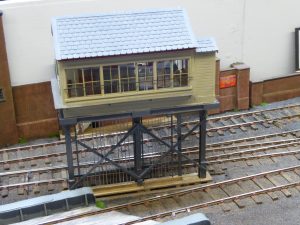 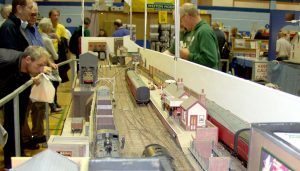 A view along the full length of the model

The Reality of Haydon Square

The London and Blackwall Railway made an early appearance on the railway scene, opening in 1840. It was a short railway, being less than 4 miles long, but it had importance out of proportion to its size. It linked the very important West India and East India docks with the City of London, Fenchurch Street being the terminus. Its strategic position meant that a number of important companies built spurs off it to their own good facilities, amongst which, close to Aldgate High Street, the London and North Western Railway built Haydon Square goods depot.

The Great Eastern leased and controlled the London and Blackwall from 1866, but it remained nominally independent until the Grouping, becoming part of the LNER in 1923.

When thinking Fenchurch Street, knowledgeable people will immediately think of the London, Tilbury and Southend Railway, whose principal London terminus it was. The LT&SR was initially the creation of a constituent of the Great Eastern and London and Blackwall, but took on an independent existence. It concentrated it services on Fenchurch Street station, but was never the owner.

Relationships between the GER and the LT&SR were never particularly smooth, but took a decidedly unexpected turn when the Midland Railway took control of the LT&SR in 1912. It was by this route that the LMS ended up being the principle user of a main line terminus in London owned by the LNER.

The Fiction of Haydon Square

Relationships between the LT&SR and the GER became worse and worse in the early 1900s, particularly when it came to dividing up the cost of running Fenchurch Street. However, the LT&SR had a very weak negotiating hand as its only alternative was to run trains along the Whitechapel and Bow (opened jointly with the Metropolitan District Railway in 1902) to Aldgate, but this had very limited capacity. An alternative was required, but help was at hand – at a price.

Tilbury docks, opened in 1886, were attracting increasing shipping traffic as it shortened the trip up the Thames and avoided the congestion in the Royals and East and West India docks The London and North Western Railway wanted access to this source of revenue, but rail access to Tilbury docks was solely in the hands of the LT&SR. Knowing of the dispute between the LT&SR and the GER, the L&NWR offered a deal: in return for access to Tilbury (via the North London Railway which the L&NWR controlled), the L&NWR would build a modest station at their Haydon Square goods depot for LT&SR traffic. The latter jumped at the chance to break the GER stranglehold and so Haydon Square station was opened in 1902. Shortly afterwards the GER and the LT&SR agreed mutually acceptable terms for continued use of Fenchurch Street, but Haydon Square station was now a reality.

Little did the L&NWR foresee that their fierce rivals, the MR, would take control of the LT&SR 10 years later – but then, nobody expected it. This lead to under-utilisation of Haydon Square until the grouping in 1923 threw the MR and the L&NWR together and it all came under the one management of the LMS.

The very restricted site at Haydon Square resulted in only inner surburban trains on the lightest used routes being sent to this station. With some irony, the LNER and the LMS agreed that it would be better all round if the trains serving the former London and Blackwell (which had been very badly affected by, first, trams and, then, motor bus competition) were diverted to Haydon Square, freeing up more capacity at Fenchurch Street for ex-LT&SR trains. Hence both companies ended up serving the termini owned by the other!

It was also clear that Haydon Square was very well situated for parcels and newspaper traffic from the printing works in Fleet Street. Thus a very healthy traffic flow serving much of Essex was funneled though Haydon Square from the mid twenties.

However, all of this traffic fell in to rapid decline in the late 1950s and early 1960s and it was realised that Haydon Square station was no longer needed, Fenchurch Street being perfectly adequate, particularly after electrification. The station and the goods depot closed to all traffic in 1962, almost sixty years to the day after opening.

The Building of Haydon Square

Quite a few planning meetings were held before we hit on the idea of adaptinng an Iain Rice plan which allowed nearly the whole length of the layout to be scenic, while allowing reasonable operation. This is achived by a sector plate at one end feeding cassettes which are kept behind the layout. We wanted to create an impression of the grubbier parts of London, set on arches above the street. A 1/3 full size card mock-up has was built which helped guide the construction and highlighted potential problems before they have become actual problems.

We have built the baseboards to be as light as possible by using self-made laminates of plywood and foam sheet. This gives a lot of strength without much weight. The trackwork, including the point work has been built from scratch with the objective of achieving a free-flowing look to the layout. 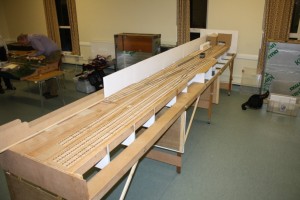 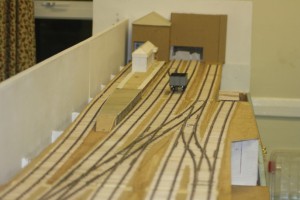 The fiddle yard is based on casettes behind the backscene. These are fed via a sector plate at one end of the layout. This means that the entire length is scenic, without wasted exhibition space, again part of a drive to maximise appeal to exhibition managers while creating something we can enjoy operating. 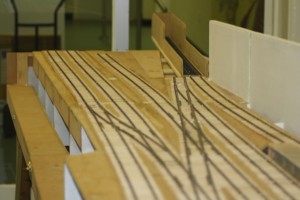 At one end the layout is bounded by a warehouse complex and at the other by the goods yard buildings. Along the front we have a street running track.

The layout has now been to nine shows and has performed well. We were encouraged by the comments received and by the sequence of operations which have enough interest to keep both visitors and operators entertained. To help with shunting we have developed our own radio control system which works with un-modifed locomtives and allow us to operate points and isolate sections.